Picture Perfect Politics: The Power and Loss of Political Cartoons

Political Cartoons have reflected and shaped public opinion on politicians and their policies for decades. But why is the cartoon such a powerful political tool? And what do we risk in losing them?

In recent years, there have been fewer and fewer political cartoons published, and the New York Times abolished the last of their daily cartoon columns in 2019. With the rise of social media, imagery, and memes, we are in turn witnessing the downfall of more traditional forms of media and imagery, including the political cartoon.

There are many reasons why people may be unaware of certain aspects of politics. Some find politics too heavy and dismal to consume on a daily basis. Others may feel too uneducated to understand the many nuances within the political world. Political cartoons solve many of these issues because they offer a digestible and accessible assessment of the current political climate. No matter what your level of education or political understanding, a political cartoon will be a way for you to access political knowledge and better understand policies and politicians. These cartoons have played a key role in political and journalism history through humor and caricature-like images.

Political cartoons have not only responded to politics but have also helped shape political discourse and public opinion. The term “McCarthyism” which was developed by the political cartoonist Herbert Block or “Herblock” and is based on the US Senator Joseph McCarthy from the 1940s-50s. Block coined the term to describe the ways in which McCarthy made false claims and accusations to grab attention and stir up fear and suspicion among the public during the Red Scare. Block published the comic below in 1950 in the Washington Post to raise awareness of the misleading nature of McCarthy’s claims. This lead to McCarthy’s lessening popularity by the mid-1950s when some of his statements were proven false. 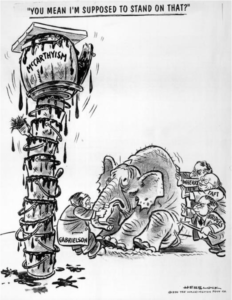 This example proves the impact a political cartoon can have on shaping public opinion and discourse about the political climate. And some may question how the loss of the traditional political cartoon will affect people today given the rise of social media and political memes, videos, tweets, etc. But a key difference is the reliability of the source. On social media, anyone can publish any sort of comic, cartoon, politicized comment or meme; but with major reliable news publishers abolishing their cartoon columns, we are losing an accessible media form from trustworthy journalists. This risks more misinformation, especially for populations who would turn to political cartoons possibly related to the insecurities listed above such as feeling uneducated or overwhelmed by the negativity in traditional articles and reports about politics.

You can read more in Jeva Lang’s article in The Week titled “What We Lose When We Lose Political Cartoons,” or read cartoonist Chappatte’s “The end of Political Cartoons at the New York Times” which he also gives a Ted Talk on.